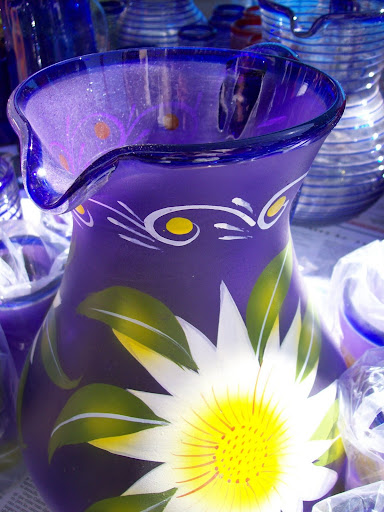 Tonala is another one of those Guadalajara “municipalities” that actually sit within the city of Guad itself.  In the United States, large cities have suburbs and exurbs, both of which primarily exist on the outskirts of the city.  But Guad has self-governing pueblos that sit squarely within the confines of the city.  Tonala is one that exists within Guadalajara “proper.”

Tonala is known for ceramics, pottery, and glass objects, many of which are made on-site or thereby and thus are less expensive than the same items elsewhere.  And on Thursdays and Saturdays there is a tianguis (open market) in Tonala that offers even more goods.

A couple of years ago, fairly close to Christmas, some friends and I went up to check out the tianguis and I was amazed by the number of beautiful things for sale and also by the crowds.  My friends vowed never again to go to Tonala on tianguis day.   It was a mad house! 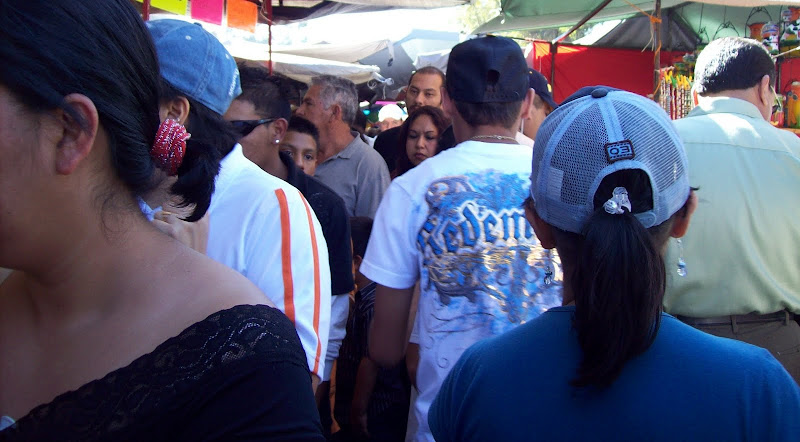 The sidewalks were so crowded that I almost never stopped moving for fear of being mowed down and trampled to death (literally), but I wanted to take photos so these were, for the most part, point-and-shoot (again, literally).  I probably took 400 photos that day, but the nice thing about digital cameras is that you can do that and not spend a fortune on film.

So here are some of the pictures I took that day.  I’ll let most of them speak for themselves because they are self-explanatory….but cool! 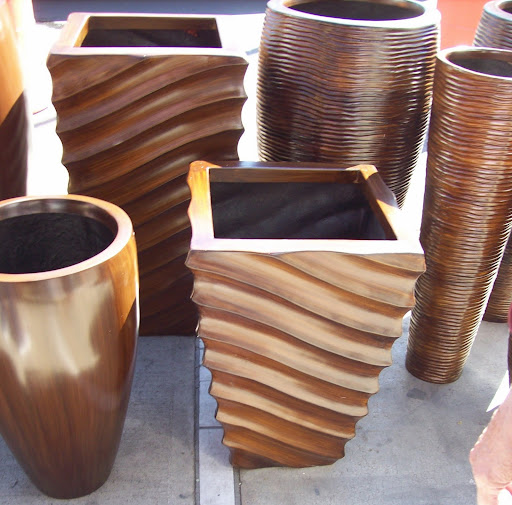 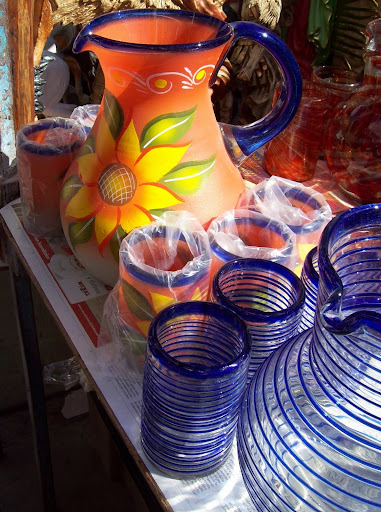 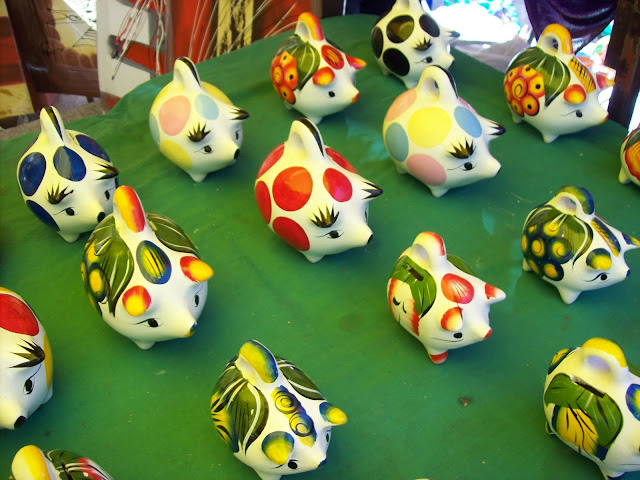 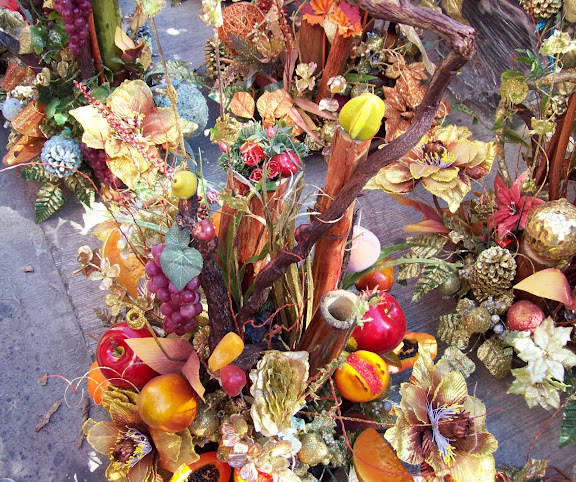 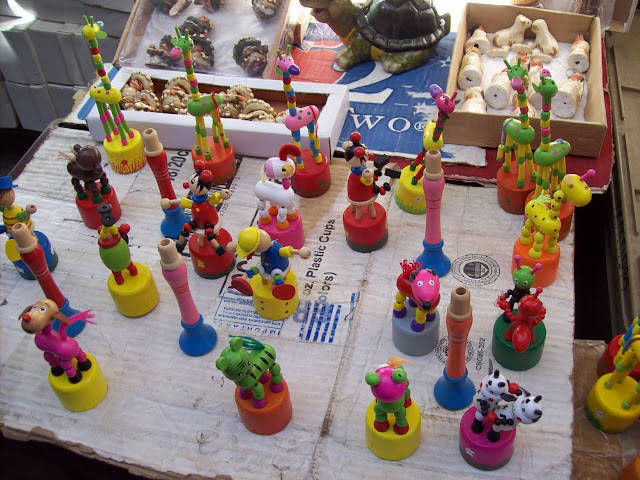 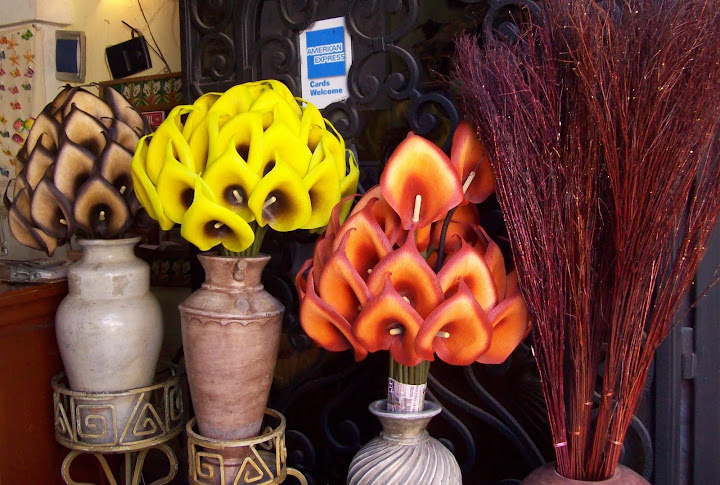 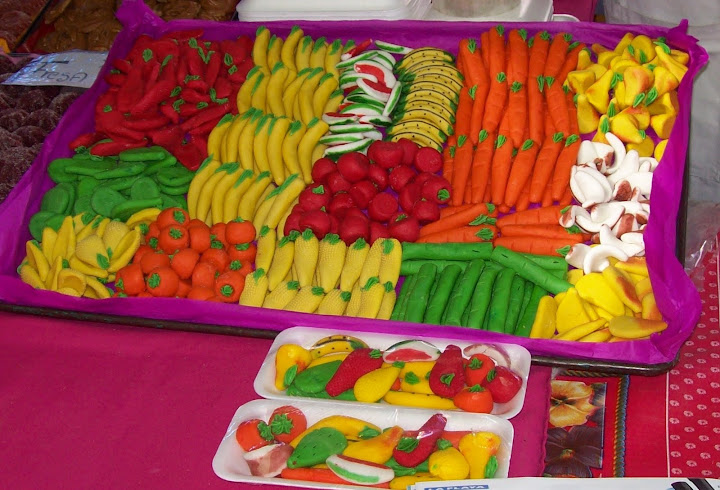 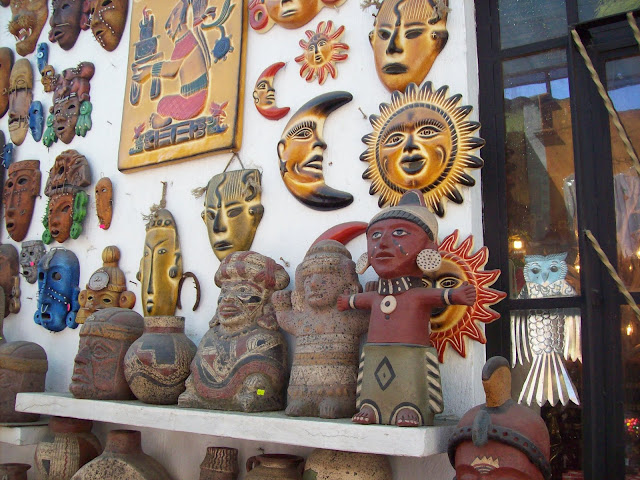 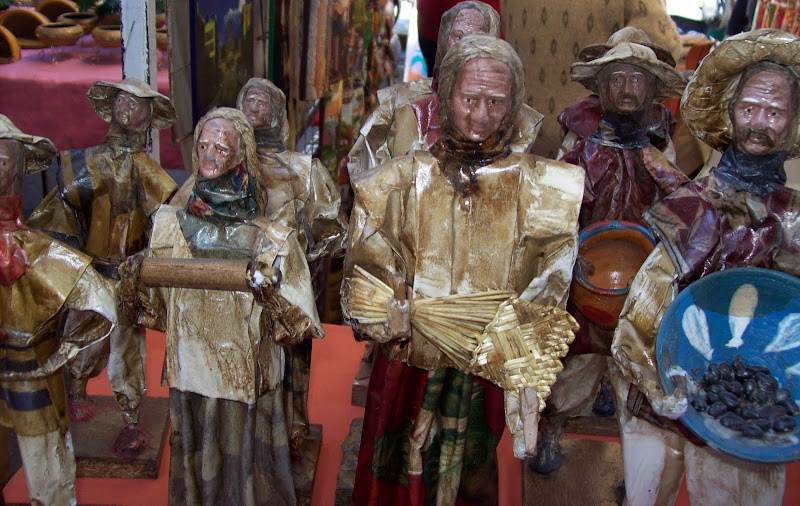 This style of glassware is VERY popular hereabouts.  It’s a rare Lake Chapala home that you can enter that doesn’t have some or all of this: 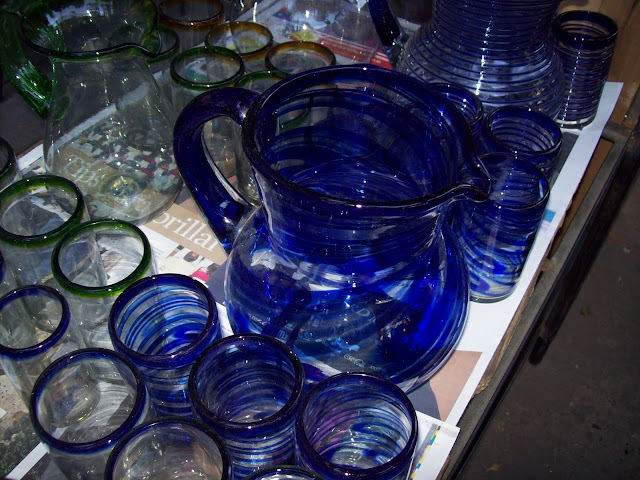 Talavera-style ceramics are popular throughout Mexico, although real Talavera pottery originates in Puebla and consists primarily of blue and white decorative features:

But the so-called Talavera from Tonala is much more colorful and should probably be called betus pottery.  (I’m hoping for a correction from my more knowledgeable sources!)  It’s much more bright and colorful.  In Tonala, you can purchase all types of items in this style: 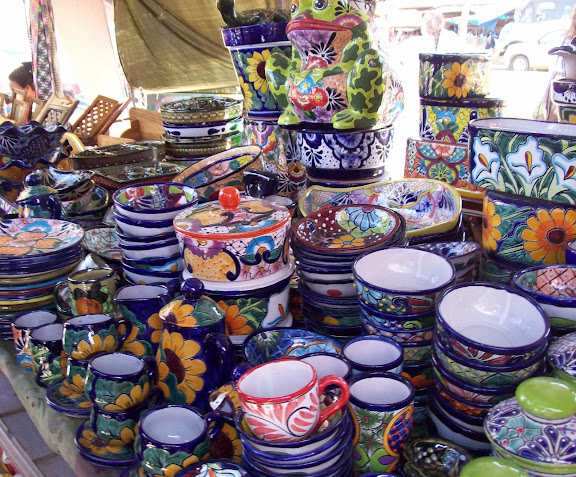 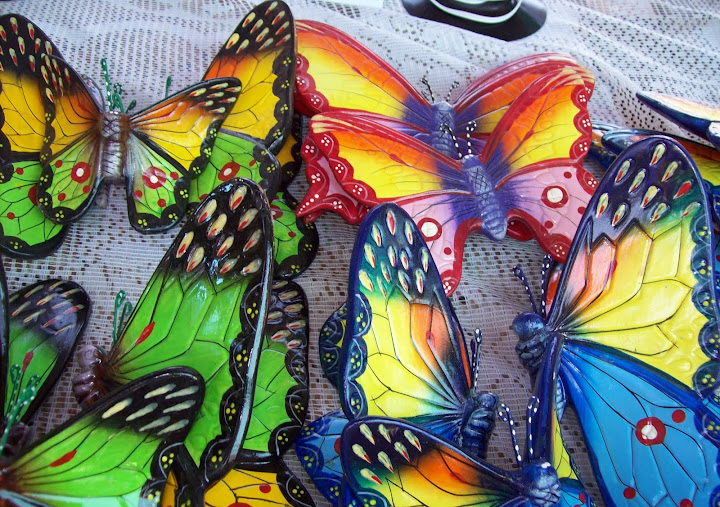 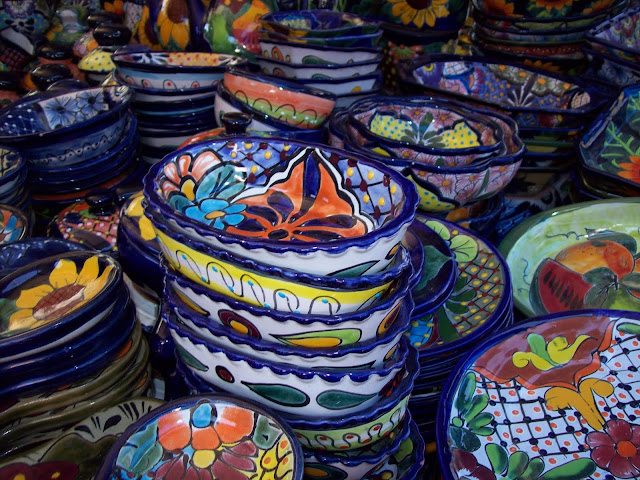 And, yes,  up to and including the bathroom sink! 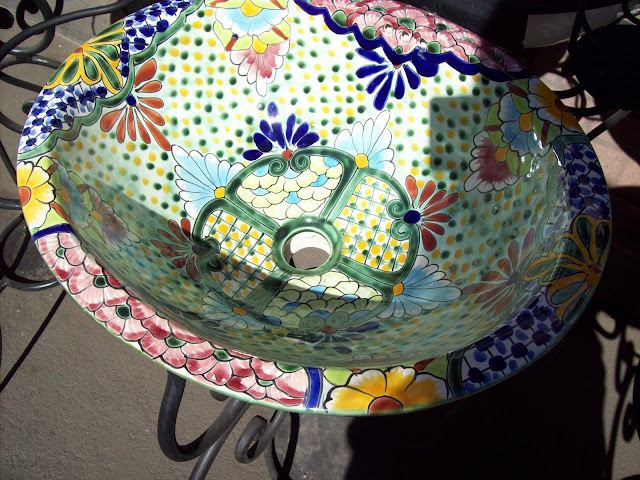 So what did I buy that day?  Nothing expensive, I can guarantee you, because I live in furnished places and don’t need them, but I did buy some of these, which are created out of “left-over” glass at the local glassblowers: 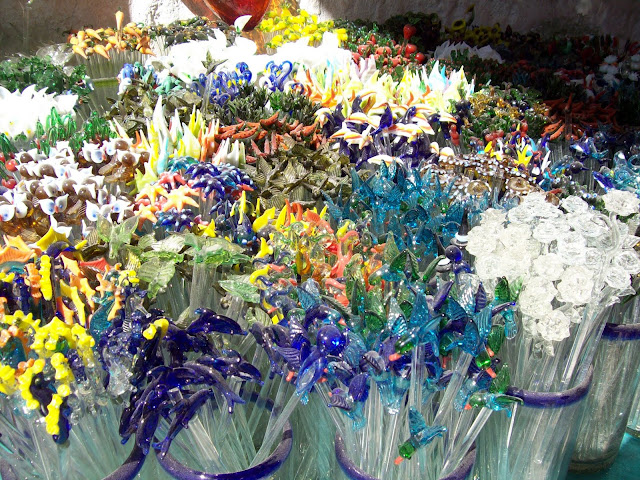 In fact, here are the swizzle sticks that I bought at a cost of maybe 50 cents apiece (probably less…it’s been awhile and I forget): 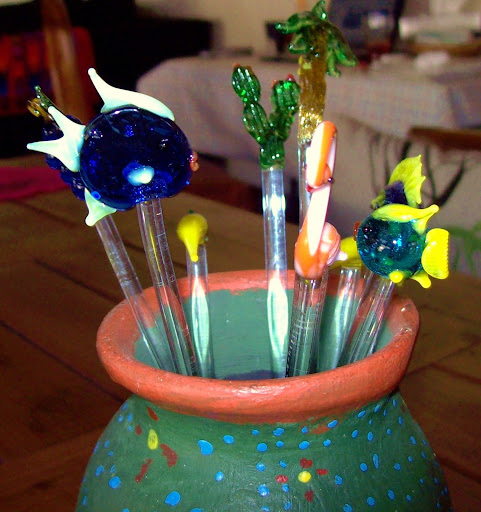 And they’re contained in a little vase for which I paid maybe $2.00US and which is made of recycled materials in Tapala, Jalisco, up in the mountains of Jalisco.

But my real “find” in Tonala that day was this spoon holder for 25 pesos (again, about $2.00US).  It sits on my counter and gets used pretty much daily and washed equally often and yet still retains all its color.  A wonderful purchase from Tonala! 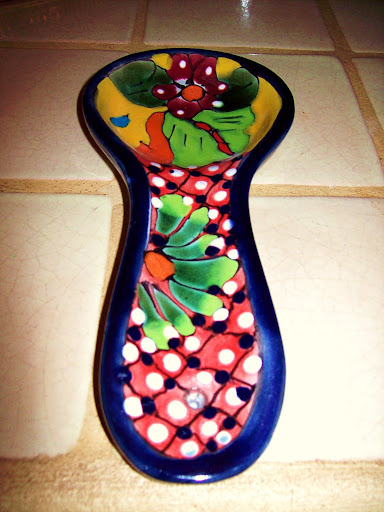 in april of 2008, i moved from the united states to mexico. during my working days, i held lots and lots of jobs....almost all chosen because they were fun or interesting instead of how much they paid. when i started thinking about retirement (in my 40s), i realized that i would never be able to retire to a country where english was the native language. and although i had traveled to every state in the US -- and lived in lots of them -- i had never been outside the country with the exception of canada and mexico. and since you now know that i could never afford to retire in canada (even to the french-speaking area), mexico won by default.
View all posts by Barbara →
This entry was posted in Fairs, Fun Stuff, General, Lake Chapala, Shopping and tagged Guad, Guadalajara, Jalisco, Lake Chapala, Mexico, Talavera, Tianguis, Tonala. Bookmark the permalink.